Edit an empty pool object in the Appearance Pool to start to create a new appearance.

Edit an appearance pool object using one of these 3 options:

If an existing pool object is edited, then the editor opens with the current state of the appearance.

This is the Appearance Editor: 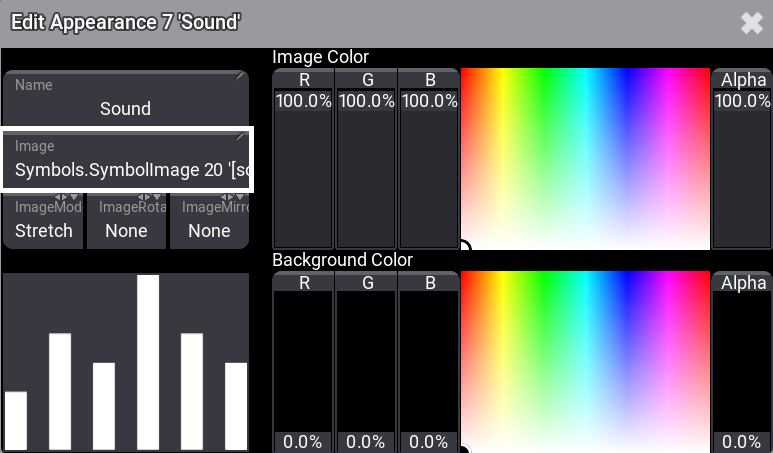 There are five input boxes, two sets of faders with a color picker to adjust color, and finally a preview area that displays a preview of the appearance.

The Background Color fader and color picker can be used to change the background of the appearance. The default background is transparent (Alpha fader at 0%).

Turning up the alpha and using the R (red), G (green), and B (blue) faders make it possible to mix any color in the RGB range. The color picker can also be tapped to select a color.

Giving the Appearance a Name

Many editors and pop-ups have a Name input field. A name can be set using the Label keyword.

Appearances can be labeled like any other pool object.

It is also possible to give the appearance a name in the editor:

Restriction:
Appearances cannot have a Scribble in the label.

Adding an Image to the Appearance

Appearances can use an image. The image is placed in front of the background but behind a label.

The images have different modes. Their modes define how the image is adapted to the aspect ratio.

These are the different modes:

Do the following to change the mode:

The color of the image can be adjusted using the top set of fader and color picker.

This means that the same image can be used on different appearances but with different color hues and transparency.

Restriction:
Color can only be added to an image. This means that a black image cannot be changed, but a white image can be changed.